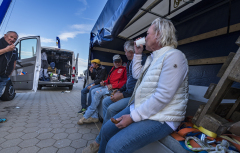 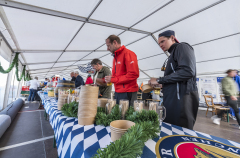 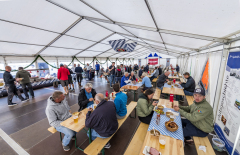 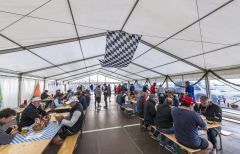 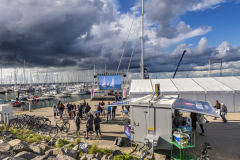 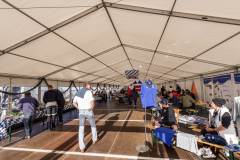 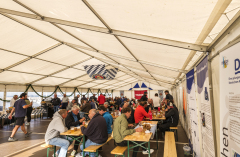 From wave to wind to calm and champagne breeze, everything was present in a week of world championships off the Baltic Sea resort of Kühlungsborn, with whose title win Klaus Diederichs now goes down in the hall of fame of kite sailors as double world champion.

Together with Jamie Lea in the fore and Diego Negri as tactician, the England-based Dragon Crack now also wins the International Dragon Class World Championship after the Marblehead Trophy at the beginning of May, his third podium finish overall at a Dragon World Championship. World Champion in the Corinthian Classification is Philipp Ocker, based at Lake Starnberg, with Florian Grosser and Oliver Davies in 8th place overall.

Second place in the professional classification went to the double world champion Andy Beadsworth, who starts for Turkey. Actually black flagged in the last race, but rated in the end, he secured the silver medal with sailing pro Simon Fry and Arda Baykal. Bronze went to the reigning European champion Wolf Waschkuhn from Switzerland, sailing together with Joao Vidinha and Charles Nankin.

Best German in the professional ranking and in the end definitely winner of the hearts is Ingo Ehrlicher (GER 77) with tactician Malte Philipp and trimmer Michael Lipp in 4th place. The team had to swallow the bitter pill that they had sailed excellently well, in fact on the podium, and then were removed again uninvolved via the 'green table'.

It was a week of variations and exciting battles - from the start to the legs around the barrels to the finish, boat after boat worked hard and got the maximum out of it. The outcome was never certain, tactics, boat handling and boat speed were sometimes better for one team, sometimes for the other by that decisive "mu".

Until the last day it was not clear how the World Championships would end. Although Klaus Diederichs, Andy Beadsworth, Wolf Waschkuhn, Ingo Ehrlicher, Graham Bailey, Peter Gilmour and Pieter Heerema had broken away from the front of the field, a black flag - and there were several - or even a decision for the wrong side threw the results into confusion again.

"An amazing week, but not easy, particulary for the tactisians" was how the new world champion summed it up, who finally managed the most consistent series and crowned it appropriately with a first place in the last race.

In terms of sailing, the Dragon World Championship in Kühlungsborn had started on Sunday with bright sunshine and light winds. The very first race showed that the World Championship would be close and tactically challenging - while Andy Beadsworth and America's Cup veteran Peter Gilmour, for example, fought on one side, Danish swashbuckler Frank Berg went for the left and won the opening race.

On day 2, the 51 crews from 13 nations experienced that Kühlungsborn can also handle wind and waves. During a frontal passage with gusts of up to 40 knots, most of the kite sailors escaped into the shelter of the harbour. As soon as they were inside, they went out again for two fantastic races in good wind and waves.

"Like off Fremantle, Australia," enthused Peter Gilmour, who turned his training advantage there into a day's victory, winning both races of the day. Finally, in medium winds, Graham Bailey showed that even venerable old ladies can sail around the ears of the new GRP boats: With the newly renovated royal 'Bluebottle' he sailed two fourths on the third day in medium winds and stood on the podium as the day's winner in the evening. The 'Bluebottle' - once a wedding gift from the Island Sailing Yacht Club to Her Majesty Queen Elizabeth II and His Royal Highness the Duke of Edinburgh - sailed in Kühlungsborn in the first international regatta since her restoration and reactivation in 2021 - on the occasion of the Queen's 70th anniversary on the throne. After skilfully emerging as the day's winner, it was only the Blackflag in the last race that catapulted the boat with the royal esprit down to 5th place.

Race director Nino Smueli made up for the day's lull in the middle of the World Cup week with three scheduled races the next day. Sailing into the evening hours followed by a World Cup dinner: the perfect menu for a perfect day. The Austrian Corinthian Christoph Skolaut, who had already managed a third place at the beginning of the week, sailed well to the front with 17-3-1. However, with 4-21-3, Denmark's Jens Christensen, who was crewed by former World Sailing President Kim Andersen, also showed that he is still a force to be reckoned with at the front. However, after a black flag on the final day, the crew pulled out of the race and did not compete any further.  The winner of this long day of racing was

with the fantastic performance of 2-5-7 equal in points with the later World Championship winners Klaus Diederichs the later fastest German and winner of hearts GER 77 Ingo Ehrlicher with Malte Philipp and Michi Lipp.

From a German perspective, the placings of Olaf Sternel, who sailed with Mario Wagner from Rostock and Stefan Waack from Schleswig-Holstein, are also remarkable. With 4-6-6- in the last three races, they achieved exactly their dream goal of "top ten" in tenth place overall. Nicola Friesen, the only coxswain in the field, finished 12th together with Vinci Hoesch and Kilian Weise.